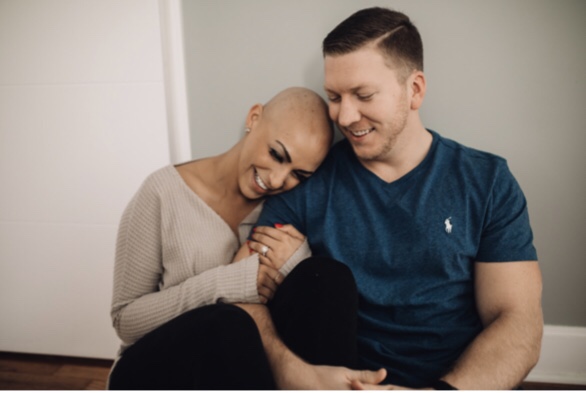 Hi! My name is Meghan Pegram. I was diagnosed with triple negative breast cancer at 28 years old, just 10 days after getting engaged…

I first felt my lump in the shower. It felt like a marble. It was perfectly round and hard as a rock. I honestly didn’t think too much about it. Later that week, I asked Tj if he felt it. When he touched it, I yanked back! It hurt so bad! It felt like a deep bruise. I called my OBGYN, but she was booked for a couple of months. Instead they sent me to a Nurse Practitioner. She also felt the lump and sent me to get a mammogram. I remember thinking this was not anything serious. I just assumed they could remove the lump and I go on with my life, after all I had a wedding to plan!

My doctors did not believe it was cancer. They said I was “too young” for cancer. (insert eye roll) Tj and I had a trip planned to Italy to visit my parents in a week. My doctor told me not to worry and that we would figure this out when we came back. We went ahead and scheduled a biopsy for the following Monday after we returned. We stayed in Italy for 10 days and Tj proposed on day 7 in my favorite city, Cinque Terre!

Of course I was freaking out. It was a dream! My lump was the last thing on my mind. I was so focused on everything wedding! Looking back, I now thank my doctor for letting me to go Italy and cherish that happy time all before cancer.

We returned on Saturday and had a biopsy set for Monday. I was still so oblivious to what was happening. Tj went with me as we showed off my ring and pictures to the nurses. We were still on cloud nine from just getting engaged and there was no way some lump was going to stop me. (or so I thought)

The next day I had a phone call from my doctor. I will never forget this moment. I was out painting the house with my future MIL. (my fiancé and I just bought a fixer upper so she was helping me while he was at work) I got down off of the ladder and I heard my doctor’s voice. He asked me if I was home and if I was alone. Then, I heard it in his voice. I knew something terrible was coming. I remember hearing him say,  “You have cancer.”

I didn’t cry. It was really weird. I grabbed a notebook and began writing (must be the teacher in me) I wrote down words like “oncologist”, “inductive carcinoma”, and “double mastectomy”. I was so clueless and so scared. I immediately called Tj. This is where I lost it. I started sobbing. I could tell he was also freaking out, but he did a very good job of hiding it to keep me strong. He said he would there as soon as he could and he raced home. I hung up the phone and went outside and told Judy. I was praying this was all a bad dream! This could not be happening! We seriously just got engaged!! This was supposed to be the happiest time of our lives! I was freaking out inside, but I decided to keep painting. And praying. I was painting and praying like crazy until Tj pulled in the driveway.

He ran over to me and just held me. I fell into his arms and got a really good cry out. He cried too, but then he looked at me straight on and said, “We’ve got this!” I can’t explain how good this felt. Something about what he said made me I believe him. We did have this!

At my first oncologist appointment, Dr. Giantold me I would absolutely need chemo. He told Tj and I all about Triple Negative Breast Cancer as we nervously scribbled down every detail in a notebook. He told us how aggressive it is and he stressed the urgency of starting treatments ASAP. I naïvely asked about losing my hair. He told me I would lose it and it would happen by week two. He was so confident it was going to happen and that is when it hit me. I have cancer and I was going to be bald.

Anyone that knew me before cancer knew that my hair was a HUGE part of me. Literally. I had the most thick and ridiculously curly hair. I was so scared but instead of letting chemo take my hair from me, I decided to donate it to Wigs4Kids.

If you are not familiar with this program, it is amazing!! They make and DONATE wigs to children battling cancer. I was floored when I found out that some companies actually charge for wigs!

My hair was one part of my cancer journey that I could control. Also, knowing that my hair (it seriously probably made 2 wigs) went to some precious little kiddos with cancer made losing my hair SO much easier! Not to mention I thought I looked pretty badass with a shaved head.

A couple days before my first chemo treatment, I started thinking about how chemo would affect my fertility. My mind was overflowing! I had so much to think about and I had so many questions! The next day, I called Nashville Fertility and scheduled an appointment. They were amazing and understood the urgency of everything I was about to go through. They started me on hormone treatments right away. I went through 10 nights of injections, an egg retrieval surgery, and I was able to harvest 16 eggs!! Tj and I were so excited! Now that we safely had our future babies in the freezer, I was ready to begin my fight.

On January 8th I had my double mastectomy. Unfortunately, during surgery they still found a small bit of cancer. Meaning I did not have a complete response to my chemo. Dr. Gian said it was a TINY amount. Regardless of the size, it was STILL cancer. I wanted it out! All of it! 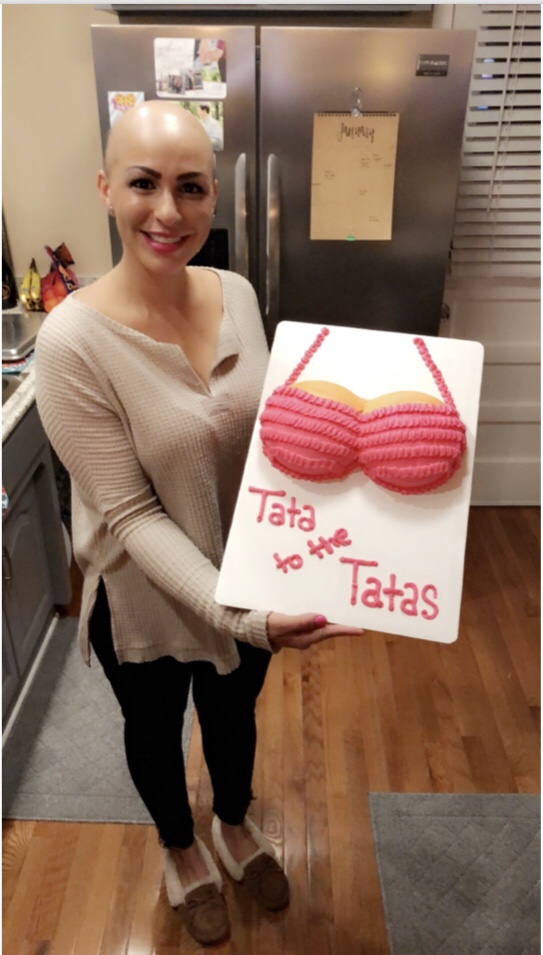 Dr. Gian suggested that I also complete 28 rounds of radiation as a preventative measure and I agreed. I wanted to be able to say I did EVERYTHING in my power to ensure this cancer NEVER comes back! My plastic surgeon wanted me to keep my expanders throughout radiation. He over filled my right foob by 50 cc. He said the skin on the radiated side would be much tighter after radiation and he wanted them to be as natural as they could.

Six months after radiation, (which seemed like forever) I had my exchange surgery for my soft girls. Man was Dr. Medling right. My radiated side is MUCH TIGHTER than my left. My foobs aren’t perfect, but they are pretty dang close! I definitely miss having feeling in them and sometimes I even miss my nipples, but when I look in the mirror I try to remember what my body went through. My scars tell my story. I fought hard and I survived.

Today I am about to celebrate my 2-year cancer free anniversary and I cannot tell you how good it feels!! My advice to those battling cancer is to stay strong mentally and keep your faith. Cancer can be very dark, but the more you focus on that light the easier your journey will be. I always say staying strong mentally is over half the battle.

Also, I highly suggest you find other survivors or “breasties” to vent, talk, cry, and drink margaritas with. 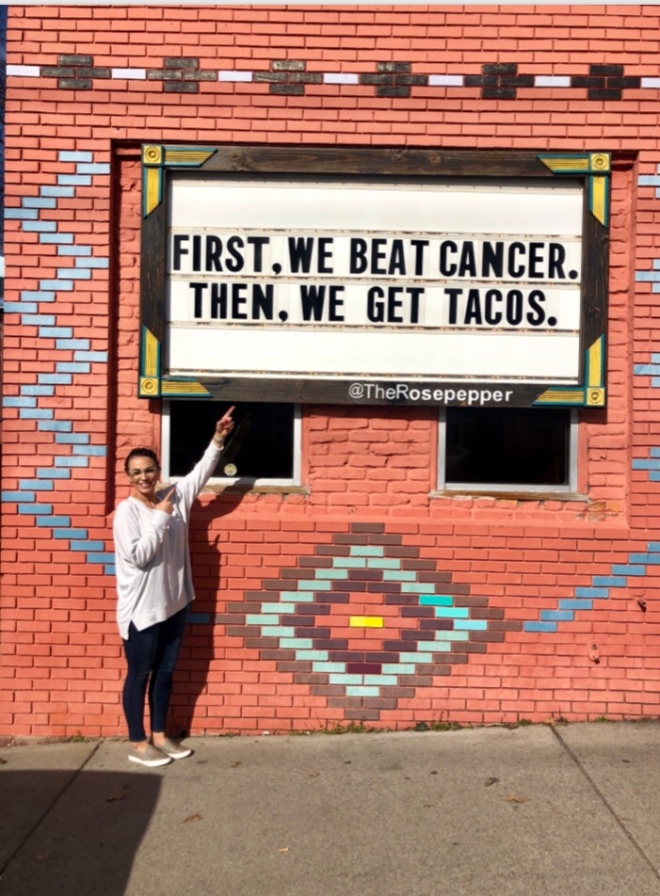 I heard this quote at YSC Summit last year and I absolutely love it.

“The initiation sucks, but the sisterhood is forever.” Keep thriving sisters!

I created an amazon list of everything I used during treatment both chemo and surgery. Hopefully this helps!

“I Can Do All Things Through Christ Who Strengthens Me” Philippians 4:13

One thought on “Meghan’s Story”