My name is Callie, I have been married to my husband, Scott for 14 years. I have two amazing stepsons (17 &18) and a beautiful 13 year old daughter. My husband has been in the Army for 15 years. We are from the middle Tennessee area, we lived in San Diego when I was diagnosed.

Sometime in late 2016, at age 31 I found a lump in my left breast, I was always good about doing monthly self checks, I don’t know how I missed it before then.

The lump didn’t feel like what I thought cancer would feel like, it wasn’t like a marble or grape, It was more of a, flat on the bottom, movable lump. I scheduled a well woman’s exam with my primary care doctor immediately, which I rescheduled two times. I am so thankful that although my doctor didn’t think it was anything serious, she wanted to be sure. I was scheduled for a mammogram and ultrasound.

February 3rd, 2017 my husband and I headed to the radiology clinic. I was so scared; I am thankful that my husband was allowed to be with me during the ultrasound. Three days later my doctor called and said  they wanted to do a biopsy. She reassured me that it was still probably nothing. I Recently read my ultrasound results that read: Highest Probability of malignancy. The morning of the biopsy, I felt sick. I am so thankful the staff allowed my husband to be in the room for the procedure. I cried before it even started. I wasn’t worried about the pain of the procedure I just knew it was cancer, I even told my husband that I felt like the doctor doing the biopsy thought it was cancer because of things she said to me. The doctor said my results should be back in 3 days, I called my primary care doctor and scheduled an appointment to get my results. I didn’t want to get that kind of news over the phone. The next few days were a blur.

Finally on February 17, 2017 at 5:30pm my husband and I sat waiting for the doctor to come in. I know my doctor dreaded telling me the news. It took forever for her to come in the room, She cried as she said, “it’s cancer, you’re young and we need to hit it hard.” I didn’t even cry. I immediately started planning. I knew we needed to try to get closer to home. When we got home we had to tell our daughter. She was 10 years old at the time. The moment I told her, I saw the innocence within her disappear. Telling our children was the hardest part of this entire journey.

The next few weeks were filled with more mammograms, ultrasounds, MRI’s, genetic testing and meeting the surgical oncologist. During all this testing, my husband was submitting paperwork to have us Compassionately Reassigned to Fort Campbell, Kentucky, one hour from our home town. While we waited on an answer from the Army, we had to keep moving forward with my treatment.

On March 23, 2017 I had a lumpectomy on my left breast and eight lymph nodes removed. The tumor was larger than originally thought, but thankfully my lymph nodes were clear and my amazing surgeon at University of California, San Diego, Dr Sarah Blair was able to get clear margins. I was then officially diagnosed with ER+ PR+ HER2- Stage II Grade 3 invasive ductal carcinoma. After I healed from my surgery, I met with my oncologist to discuss the next steps: chemo, radiation, and beyond. At this point, we were still waiting on an answer from the Army but knew we were also running out of time. There were only so many weeks I could wait after surgery to start chemo.

Finally, six weeks after surgery and 2.5 months after my diagnosis, the Army approved a Compassionate Reassignment and within two weeks we were moving back across the country to Fort Campbell, Kentucky. One week after arriving back in Tennessee/Kentucky, I started my first round of chemotherapy.

I received 4 rounds of TC chemotherapy (Taxotere & cyclophosphamide). My first treatment was frightening. I felt like I was just waiting on the side effects to start and I didn’t event really know what to expect. Two weeks after my first treatment my hair started falling out by the handfuls. After putting off the inevitable for days I told my husband that I was ready for him to shave my head. I didn’t want to go to a salon and be told how brave I was, I wasn’t shaving my head because I was brave, I was doing it because I had no choice. I told my husband not to stop no matter how much I cried. We both cried as my hair fell to the floor, it that moment it became real, I was now a cancer patient.

I am thankful for the medication given with chemo to control the side effects. I was given Neulasta 24 hours after every infusion and it was the worst! My body hurt so bad and I ran a fever every time. It was worth the pain because it kept my counts up and my chemo infusions on schedule.

After chemo I did 30 rounds of radiation. My skin was blistered and peeling off by the end. My mind and body were ready to be done.

I will be cancer free, two years on October 1st. I will continue taking Tamoxifen for the next 8 years. I still battle side effects from my treatment and the hormonal therapy that I continue to take, but it is all worth it. I have no doubt that a positive attitude got me through some tough days. “Fake it ’til you make it,” was my motto.

I am forever grateful for my husband, children, and the Lord for getting me through the tough times. My husband was by my side at every appointment because of his fellow soldiers and leaders at Fort Campbell that made sure he could be with me. 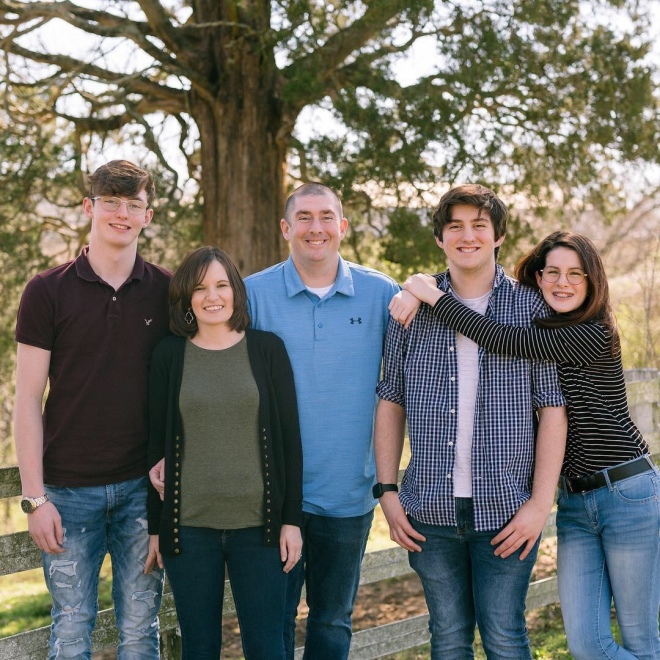